Idea Factory International, Compile Heart, and Canadian developer Artisan Studio have released the latest game in the Neptunia franchise! Come check what we thought in our Super Neptunia RPG review!

Neptune, stricken with amnesia, awakes in a mysterious world where 2D reigns supreme. With a little help from her friends, Neptune embarks on a journey to regain her memory, save the world, and 3D games as we know it.

This is a double review for Super Neptunia RPG. Ceidz and ThaRaven403 played the game, and this review presents what they both had to say.

The story of Super Neptunia RPG, as with all the games in the Hyperdimension Neptunia series, is about the four goddesses of Gamindustri; Noir, Blanc, Vert, and main protagonist Neptune. This time though, the story starts with Neptune waking up in an abandoned house, as someone walks in and asks her to pay her 2D game taxes. She’ll soon realize she suffers from amnesia and only remembers her name, which makes it easier for the Bombyx Mori member who found her will invite her to join them in their duty: collecting 2D game cartridges for leader Filyn.

Contrary to the majority of the games in the series, this one leaves behind 3D rendering and presents things in a more old-school 2D side-scrolling platformer for all your dungeon-crawling and exploration. If you’ve played Ubisoft’s 2014 hit Child of Light, you’ll notice Super Neptunia RPG bears a resemblance. You go from room to room, collecting treasure chests, fighting enemies, and sometimes encountering challenges that will require you to collect stones in a limited amount of time. When you open up the dungeon’s map, you’ll find a highly detailed map of the different rooms, how they connect to each other, and the monsters or chests are left in them. This can prove to be quite useful when you’re trying to explore and collect everything! 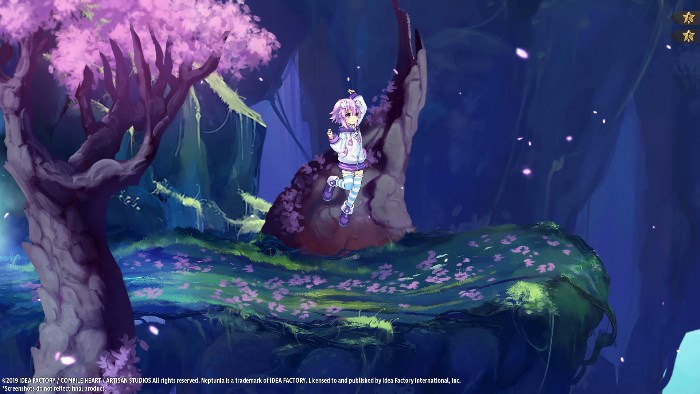 As for the combat, it’s a simple yet effective formula that can provide a lot of variety. At first, you only have a single party member, but you’ll eventually get up to four characters to fight in battles. As time passes in a fight your AP bar fills up and depending on the required amount of AP for each of your party member’s skill, you’ll be able to press that character’s corresponding face button to have them act. Outside of battles, you’ll be able to re-assign their moves to build different strategies to match your playing style and can even change the action they do based on their position on the battlefield.

The first thing I enjoyed with this game is the humor, which has always been a trademark in the series. The way they laugh at the game industry in general (2D games on cartridges being the next best thing?) is entertaining and is a lot of fun to play when you don’t want to invest yourself in an overly emotional or deep story. I also really liked the simplicity of the combat system, yet with a lot of possibilities for how you get to customize how each of your allies will behave on the battlefield. 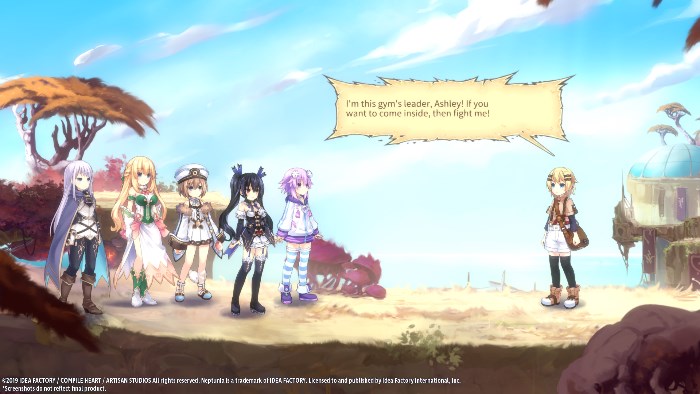 And for people who like completing quests, there is more than enough material to fulfill your dreams in this one! After playing for only an hour, I had already completed around ten side-quests I had received from NPCs – and I was only in the first section of the game! There’s a lot of things to keep you busy aside from your quest to recover your memory and help the resistance take down Filyn – plot twist!

As for the trophies, you’re looking at a pretty straightforward list to complete, apart from a few things that could be missed, if you’re not careful, and a somewhat intense grind to reach a certain amount of money, you’re going to have a good time trying to get the Platinum.

Right as the game starts, we see Purple Heart and her shadow, and we’re then quickly drawn into a turn-based battle. After the intense fight, Neptune wakes up, as if all had just been a bad dream. She then realizes she’s amnesiac and doesn’t remember anything besides her name, which is kinda cliché in the JRPG genre – even for a Neptune game -! Being a fan of nearly every previous Neptunia release, I was curious about how this one would turn out since the original Hyperdimension formula has changed considerably.

Apart from the game’s presentation, the battle system has been drastically changed. Instead of being a turn-based battle system with an amazing battle song, we’re now presented with a more streamlined system where each character is mapped to a button on the controller. In the first few hours of the game, I thought that was a bit boring because I had to wait for a single character to be ready before fighting, but a little further in the game the dynamic changes since you get more characters to spice things up. 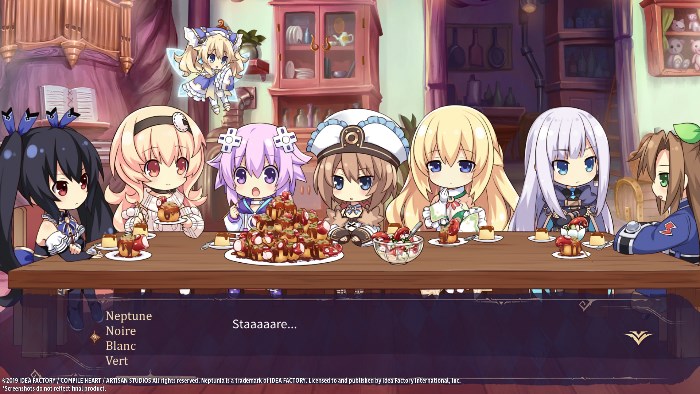 One thing I really liked was how character growth is handled. By equipping weapons or armor pieces, your character will be granted new abilities or skills once it has gathered enough experience with that piece equipped. The good thing is that once you’ve acquired that ability or skill, you can switch to a new piece of equipment and keep the ability or skill as part of the list of things you can add to your character – in a way similar to Final Fantasy IX.

As for the presentation, Super Neptunia RPG is a beautiful game with hand-drawn characters and colorful backgrounds. I thought that the voice acting was of varying quality. It was sometimes great, while at other times it sounded a bit off. ThaRaven403 mentioned a similarity with Child of Light, and I also got the same vibe while playing. Even the soundtrack for Super Neptunia RPG reminded me of my time with that game. One small annoyance I experienced was when navigating the menus, as there’s a slight loading time every time a menu is accessed. It isn’t much to complain about, but it did take me by surprise as I had expected menus to load instantly.

The dialogues in Super Neptunia RPG are very fun, and we often see characters breaking the fourth wall purposely which is a long-running tradition in the Neptunia franchise, and one of the things I prefer in these games. The characters are aware that they are inside a game, and play around with that theme in hilarious ways.

Another small issue I have to mention is the text size. Some of the text was too small to read on my 55″ TV – and issue that was more apparent when in the shops. When playing on my PlayStation Vita by way of remote play, some places were completely unreadable – not unexpected since the game was made to be seen in a much larger screen than the one on Sony’s portable console. It also felt as if there was a lot of information on the screen, which felt a bit overwhelming. If the text in the dialogues was twice as big, it would have made for an overall easier experience. Apart from that, Super Neptunia RPG is a great release that takes a new turn on the long-running Neptunia franchise, and one I personally liked. 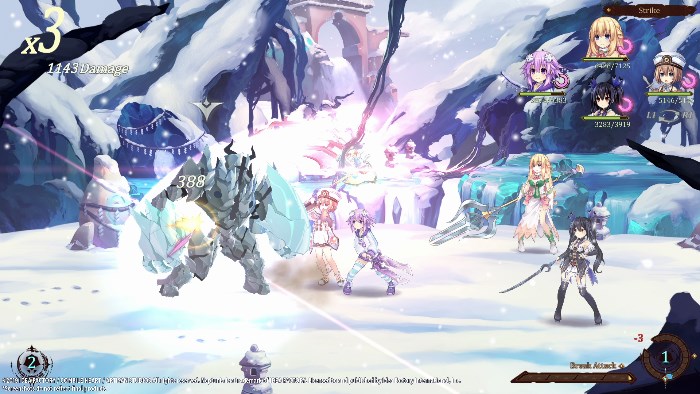 Final Thoughts
Super Neptunia RPG is a truly enjoyable RPG that should please fans of the genre, the series, and pretty much anyone that feels like playing a different type of RPG on PlayStation 4. Are you ready for some 2D adventuring?

Disclaimer
This Super Neptunia RPG review is based on PlayStation 4 copies provided by Idea Factory Intl.

This div height required for enabling the sticky sidebar